In 1977, when Jeff Maiman bought the building he turned into The Wheelhouse Restaurant, he knew he had to do something about the hardwood floors. They were worn out and ugly, painted dark chocolate.

Maiman wanted to create a woodsy, nautical look in tune with the restaurant’s location—the Chain O’ Lakes in Waupaca County, Wisconsin, a popular area for boating, canoeing, and other outdoor recreation. And he knew hardwood floors would be a key element in creating that natural atmosphere.

Maiman called a company he had heard did high-quality hardwood floor work—Ralph’s Hardwoods. From the moment Ralph’s founder, Ralph Lorenz, and his wife, Roberta, showed up at his door to look over the job, Maiman has been glad he turned to Ralph’s.

He appreciates Ralph’s attentive customer service. And as avid woodworker himself, he has great respect for the skill of their work.

“We were really, really impressed with the job they did,” Maiman said about the refinishing of the old floors he had bought. “They do quality work, and if it ain’t right, they make it right.”

The relationship between The Wheelhouse and Ralph’s has stood the test of time and is now in its fifth decade.

The rustic charm of The Wheelhouse fits perfectly with the idyllic Chain O’ Lakes, and the hardwood floors set the dining area’s tone.

“This is really a knotty pine and wood interior,” Maiman said. “It’s kind of an ‘up-northy’ feel, and the hardwood floors really make it pop. I couldn’t see having any other type of floor.” 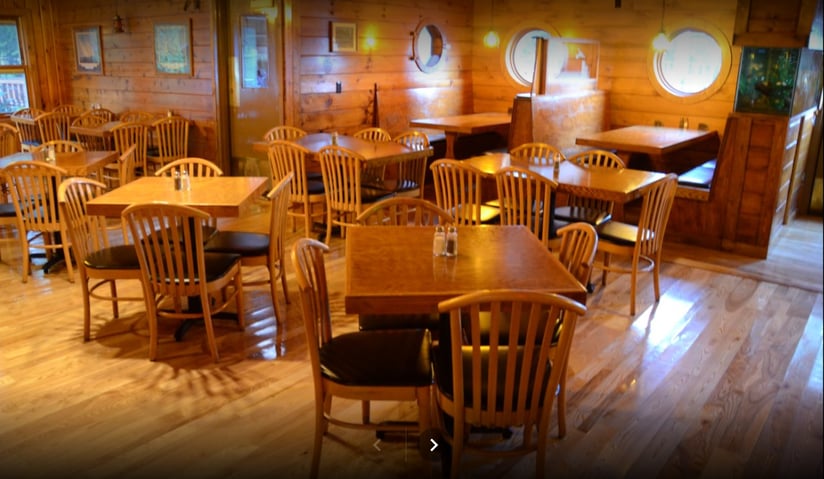 Maiman painstakingly constructed the tables and booths for the restaurant with his own hands, so working with Ralph’s is more than just good business. It’s an assurance that the floors with live up to his personal quality standards.

Whether it’s the tables and booths he sweated over, or the pizza, sandwiches, and other menu items—which are known for being delicious, fresh, and scratch-made—Maiman insists on the best. So it’s only natural that he chooses to work with a hardwood floor company that shares in that insistence.

He fondly remembers how Ralph’s once voluntarily returned to refinish a floor free of charge because Ralph wasn’t satisfied with the quality of the first refinishing. That’s the dedication to quality he’s come to expect from Ralph’s.

As Maiman has expanded The Wheelhouse, Ralph’s has put in the hardwood floors. And Maiman calls on Ralph’s every year to recoat the floors—a frequency of recoating that isn’t needed in a home setting but that Maiman deemed necessary in a high-traffic commercial space like his popular restaurant.

“We wanted to stay on top of it,” Maiman said. “Ralph’s worked very well with me in doing so.”

Three years ago, during the relatively slow winter season, Maiman had the hardwood floors completely replaced with new Ash flooring, including in areas that previously were carpeted. Now the restaurant, which has about 3,000 square feet of space in its dining area, is virtually all hardwood, coated with a moisture-cured urethane finish designed specifically for commercial spaces.

Maiman loves the new floors, and so do his customers. A compass rose inlay medallion, in particular, draws raves.

“Ralph’s blended it all so well,” he said. “I’ve had nothing but compliments from everyone who has come in. They look at our floors and say, ‘Wow! How can we get floors like that?’ And we send them to Ralph’s.”

Refinishing each year makes them look like they’re brand new, Maiman said, and he values the durability and easy maintenance of the moisture-cured urethane finish.

Let Ralph’s Do It

Maiman also owns an ice cream shop, Scoopers, across the street from The Wheelhouse. For years, Maiman refinished Scoopers’ pine plank floor himself, coating it with a polyurethane finish. But he was so pleased with the finish, and Ralph’s craftmanship in The Wheelhouse, that he eventually brought in Ralph’s to take care of the floors in Scoopers as well.

“Hands-down, they are better than I am,” he said, laughing. “And they have proven themselves.”